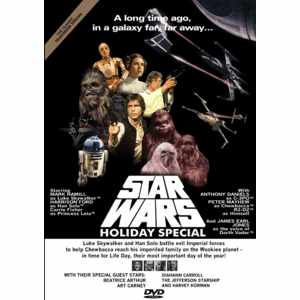 A long time ago, November 17th, 1978, to be exact, the now infamous Star Wars Holiday Special aired on the CBS television network and was seen by millions of viewers. The 2-hour special was developed without George Lucas' involvement, for the most part, but it did include much of the movie cast, including Mark Hamill, Carrie Fisher, and Harrison Ford (all apparently held at gunpoint). Then, for reasons unknown, they added guest stars Art Carney, Harvey Korman, and Bea Arthur, and musical guests Diahann Carroll and The Jefferson Starship. The result? Well... we all know some things are so bad that they're actually good, right? This is not one of those things. With no official release, all involved would like you to pretend it never happened. But it did and here's the proof. In the story, Luke Skywalker and Han Solo battle evil Imperial forces to help Chewbacca reach his imperiled family on the Wookiee planet – in time for Life Day, their most important day of the year! There are musical numbers and an animated segment which introduces Boba Fett to the Star Wars universe.