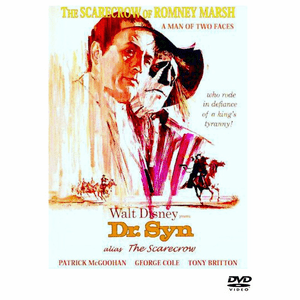 Dr. Syn The Scarecrow Of Romney Marsh 1964 on DVD

Dr. Syn The Scarecrow Of Romney Marsh 1964 on DVD

"On the southern coast of England / There’s a legend people tell / Of days long ago when the great Scarecrow / Would ride from the jaws of hell / And laugh with a fiendish yell..."

Old-fashioned to be sure, but The Scarecrow of Romney Marsh is still a ripping yarn and rousing family entertainment with its unforgettable hero, despicable villain, galloping chases and breathless escapes. Grandly produced in England, this three-part miniseries is "a story of high adventure and heart," as Walt Disney states in his folksy and avuncular episode introductions. Patrick McGoohan (known at the time for his iconic role as John Drake on Danger Man) stars as Dr. Syn, who leads a double life as a mild-mannered village vicar by day, and a fearsome avenger known as the Scarecrow by night. The haunting burlap-masked Scarecrow is a folk hero to the villagers, who are overtaxed by King George III, and brutalized by his press-gangs, who violently shanghai men into Navy service. Only two know the Scarecrow’s true identity, his sexton Mipps (George Cole), and the local Justice of the Peace’s son, John (Sean Scully, from Disney’s The Prince and the Pauper). There is a love story between John’s older sister and conflicted and compassionate English soldier Lt. Brackenbury (Eric Flynn), but it doesn’t slow things down or get too yucky. Over the course of three near-hour-long episodes, the Scarecrow foils attempts by his nemesis, General Pugh (Geoffrey Keen) to capture him, or intimidate villagers into giving him up.

This DVD set includes both the original three-part version as well as the European movie version, along with a host of supplementary extras and commentary. The quality is superb!" Best quality! A must see!"